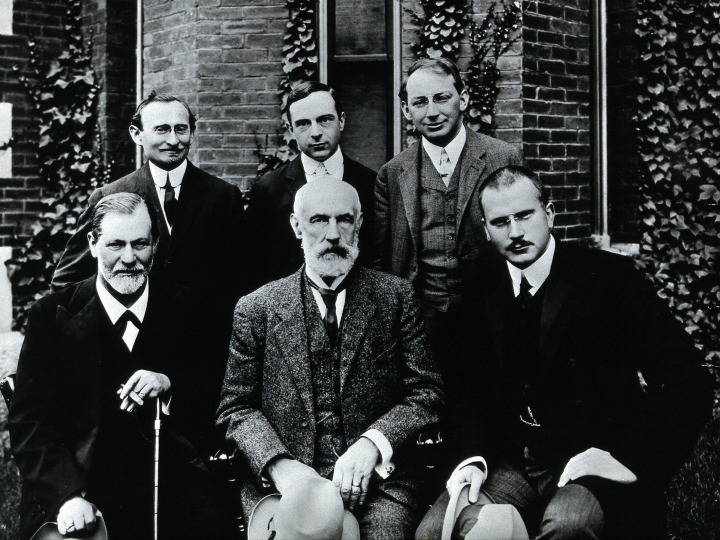 4. CARL JUNG’S WORK HAD A MAJOR INFLUENCE ON BRIGGS.
Everything changed after Briggs discovered Carl Jung’s 1921 book, Psychological Types. Simplified, Jung argues that human consciousness has two perceiving “function-types” (sensation and intuition) and two judging “function-types” (thinking and feeling), which are moderated by a person’s introversion or extraversion. Briggs was so fascinated by Jung’s theories that she began calling his book “The Bible” and wrote him fan mail. In 1926, she published an article in The New Republic distilling his theories into a sort of paint-by-numbers exercise entitled, “Meet Yourself: How to Use the Personality Paint Box.”

6. THE FIRST MYERS-BRIGGS TEST WAS ORIGINALLY FOCUSED ON THE WWII JOB MARKET.
With the adoption of the GI Bill and a new influx of working women, World War II saw the American labor force blossom. It was a boon for career consultants, too, who were seeking standardized tests that could sort all of these new workers into their ideal jobs. According to Merve Emre, author of The Personality Brokers, a slew of tests were, “made under the watchful eyes of executives eager to keep both profits and morale high.” Myers would adapt and pitch her mother’s personality tests to a consultant named Edward N. Hay, arguing that they could help people entering the workforce find their career match. Hay loved the idea.

9. THE MBTI IS STATISTICALLY UNRELIABLE.
The Myers-Briggs indicator suffers from “low test reliability.” That is: If you take the test more than twice, there’s a good chance you’ll be classified as a different personality type. “If you retake the test after only a five-week gap, there’s around a 50 percent chance that you will fall into a different personality category compared to the first time you took the test,” the philosopher Roman Krznaric wrote for Fortune. As a scientific metric, the test is consistently unreliable.