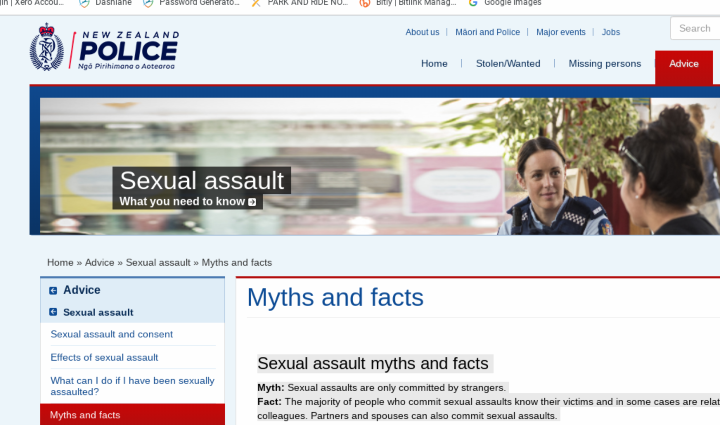 Myth: Rape is a ‘spur of the moment’ act.
Fact: Most rapists plan carefully in advance, and set up situations so the rape can take place. A rapist is capable of raping again and again.

Myth: Rape only happens when men lose their self-control.
Fact: Men who rape know exactly what they are doing. Research shows that men who sexually offend often do so to gain a sense of power and authority.

Myth: A woman can’t be raped by her husband.
Fact: Rape in marriage is not uncommon. It’s also a crime. When a spouse is forced to have sex through emotional or financial blackmail it is rape. Rape or sexual assaults can occur within marriage and/or relationships whether the victims are heterosexual or homosexual.

Myth: It is not that serious. I don’t need to report it as it won’t happen again.
Fact: Rape and/or sexual assault are criminal offences which carry sentences of imprisonment. The perpetrator may reoffend if they are not challenged by Police.

Myth: Women ‘ask for it’ by the way they dress or behave.
Fact: This is like saying that someone wants to be robbed because they have money in their wallet. Rapists look for easy targets, not women who dress or behave in a particular way. Nobody asks to be hurt or degraded.

Myth: Only young women are raped.
Fact: Rape is an act of violence that can happen at any time in a person’s life regardless of age, ethnicity, sexual orientation or gender.

Myth: ‘Men cannot be sexually assaulted’.
Fact: Any unwanted sexual contact against any person by any other person is a sexual assault.

Myth: ‘Male rape is a gay crime’.
Fact: Sexual assault is ultimately about power, control or domination of the other person, rather than a sexual attraction to one specific gender.

Myth: ‘Women always lie about rape.’
Fact: Women are more likely to deny or minimise sexual assault experiences than make them up. Those working with male sex offenders say one of the hardest things is overcoming the men’s denial that they did anything wrong.

Myth: ‘Alcohol causes rape.’
Fact: Alcohol can reduce inhibitions, but does not remove the responsibility of raping, or justify a victim being raped. ‘Having sex’ with a person too drunk to consent, or asleep or unconscious, is rape.

2019-06-27
Previous Post: TImeline – Royal Commission of Inquiry into Historical Abuse in State Care
Next Post: Regret based on flexible attitudes is the hallmark of mental health