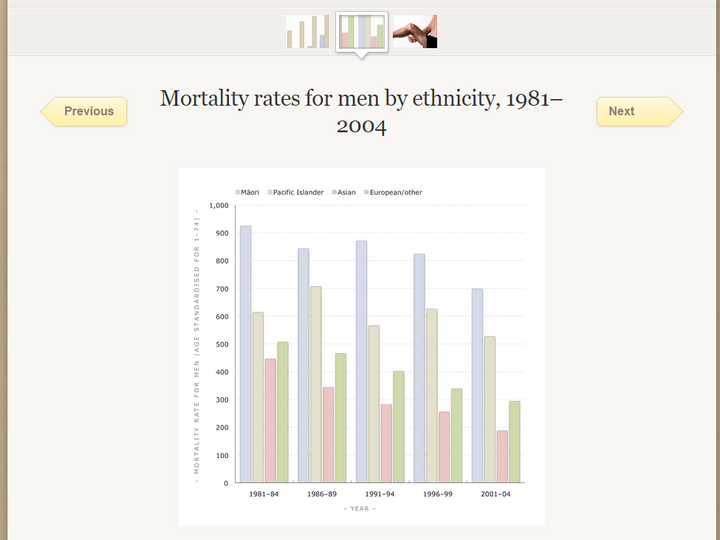 The health of men in New Zealand has slowly improved. Further health gains for New Zealand men will come through prevention of the major causes of premature death, disease and injury throughout the life course, and addressing ethnic and social inequalities.

Life expectancy measures the average age that someone can expect to live to, at a particular age. The life expectancy of a male born in 2006–8 was 78.2 years; a female had a life expectancy of 82.2 years. In the previous decade, male life expectancy increased steadily and at a faster rate than that of females. It rose by 3.8 years between 1995–97 and 2006–8, a remarkable improvement. The corresponding increase for females was 2.5 years; as a result, the gender gap in life expectancy decreased from 5.3 years to four years over the period. Internationally, New Zealand men’s life expectancy ranked seventh equal out of 30 OECD countries.

In New Zealand in 2005–7, the life expectancy of non-Māori males (79 years) was 8.6 years higher than that of Māori men (70.4). This gap had slowly decreased from the late 1990s. Pacific men had a life expectancy of 73.2 years – closer to the Māori rate than the overall rate for non-Māori. Asian men had the highest life expectancy, 81.2 years.

There were also striking differences in life expectancy at birth by measures of social and economic status. Low-income men experience higher risks of dying at every age than their more advantaged counterparts. Mortality rates have been falling for all income groups for several decades, and at much the same rate.

An important feature of the increase in male life expectancy is that most of the extra years gained have been in relatively good health. Independent life expectancy (the number of years that a person can expect to live without needing assistance) for men increased from 64.8 years to 67.4 years between 1996 and 2006; approximately three-quarters of the life years gained in this period were in good health.

Around two-thirds of life-expectancy improvements have been through the prevention of major causes of death. The rest are due to improvements in the effects of health services for ill men.